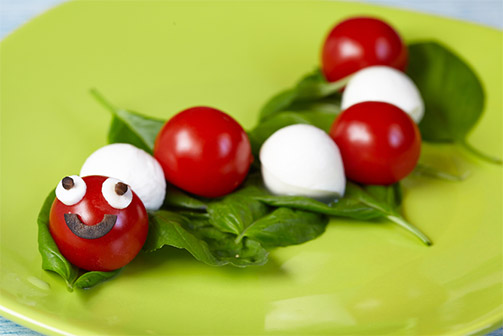 Are you struggling with trying to get your kids to eat healthy foods?  If so, you're not alone.  Many parents have a tough time with the challenge of getting their kids to eat more fruits and vegetables in their diet and feel guilty about what their children eat.  They know healthy foods are important, but have no idea how to help their kids make the switch to these healthier choices.

Kids are also a powerful influence on family eating behavior, encouraging their parents to buy high fat, high sugar foods, cereals that contain nothing but junk, and candy that is filled with chemicals and food colorings that are banned in other countries.  Parents and other family members end up eating these same unhealthy foods.

The younger kids are, the easier it is to instill healthier eating habits because young children are more receptive.  They are also naturally creative and curious, two things we can use to our advantage!  In this article, we'll talk about some great tips and trips you can use to set your kids on the right track, but first, let's quickly talk about why healthy foods are so important.

The foods that many kids fill up on today is not only contributing to physical disease, but it also directly impacts their ability to behave, their ability to concentrate, and their memory.  Kids in the US are sicker, fatter, and suffer more chronic diseases than those in any other country, and this epidemic is directly related to their food and environment.

Studies conducted in American schools have shown that when a healthy diet is introduced, many behavioral problems quickly resolve.  These studies show that there is a direct correlation between what kids put into their mouths and how they act and behave.  When diet improves, the effect is almost immediate; attention span is better, irritability lessens, and kids don’t feel tired all day.  They become calmer and better behaved.

Some schools have witnessed dramatic changes in their student body after introducing healthier food choices and removing the unhealthier ones:

Many studies have documented the health risk of exposure to pesticides (in food and in our environment) and environmental pollutants (such as those in the many toxic household cleaners that fill supermarket shelves).  Because children are smaller and rapidly growing, they can absorb 40%-50% more toxins than adults.  They have not fully formed a protective blood-brain barrier, and exposure that has no measurable effect on an adult can cause a negative reaction in children.

Recent studies show that trace levels of multiple pesticides cause increased aggression, and can also create abnormal thyroid hormone levels. Irritability, aggression, and multiple chemical sensitivity are all associated with thyroid hormone levels.  Babies fed infant formula absorb more heavy metals, such as manganese, than a breast-fed child because of contaminants found in formulas.  Not only that, but babies fed pasteurized milk products suffer more allergies, more infections, and more sickness in general than those fed breast milk or raw milk due to the quality of the milk and what happens to that milk during pasteurization.

Having Fun With Healthy Food!

The more we include kids in the process of preparing food, and the more interesting we make that preparation, the more they will associate healthy foods with fun.  Studies also show that when kids are involved in the food prep process, they are far more likely to eat what they make.

So, let's ditch the food lectures and quit force-feeding healthy foods to our kids and instead, create some positive and fun healthy food experiences instead.  It's much easier than you think, and you will enjoy these ideas just as much as your children will. 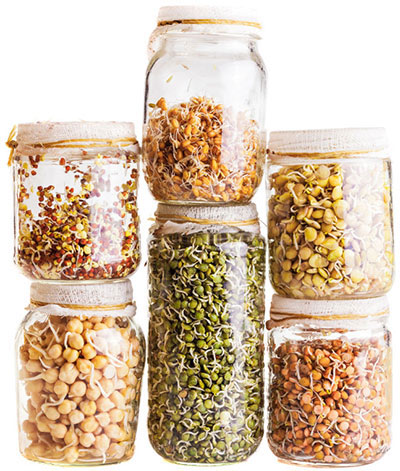 Sprouting seeds is such a fun thing to do.  Many sprouting seeds begin sprouting in just one day!  They are a great way for kids to become actively involved in watching their food grow and feeling a sense of accomplishment when they eat it.

One of the best reasons to grow sprouts is that they pack a huge nutritional punch.  In fact, many sprouts are considered superfoods because of the many nutrients they contain.

Sprouting at home is very simple.  All you will need is a sprouting jar, sprouting seeds, and water.  The seeds can be purchased from most health food stores or online.  Alfalfa, broccoli sprouts, and clover sprouts are among the popular choices.  Check out our guide on how to sprout your own goodies to get started!

When it comes time to chow down and eat those sprouts, your children may understandably think sprouts don't taste too exciting by themselves, but what about mixing them into some peanut butter, or popping a handful into an exciting fruit smoothie or fruit salad?  How about wrapping a bunch into a fruit roll-up, or mixing it into hummus?

Making pictures with foods is a great way to get kids excited about their food, and also helps them get creative when it comes to making their own food pictures.  The possibilities are endless.  Simply provide a selection of foods your children love along with the the veggies you'd like them to include in their meal/snack and help stimulate their imagination with a few ideas of your own.  Check out the examples below, or head on over to Pinterest and find others that look like fun to make.

If you have two or more children, how about a competition to see who can create the best picture?  Or giving them the responsibility of creating appetizers for the family dinner using healthy ingredients?

Let's face it - a plate of spinach isn't really that exciting to kids.  Neither is a Swiss chard leaf, or piece of kale.  BUT... how about cutting out hearts and other shapes from the leaves and adding a little peanut butter or healthy fruit jam to them?  What about picking out a yummy selection of berries and other fruits your child enjoys for a smoothie, then popping the greens into it?

Using reverse psychology can really help you out, too.  How about letting your child know that there's a food you don't really enjoy, but you know it's really good for you and you want to eat more of it.  Ask for THEIR advice on how to make that food more exciting and for ways to make it taste much better.  And hey, what's wrong with using the Popeye trick that you want to eat that food because it will help give you cool powers!

There are many flowers that are not only edible, but they look really pretty and are filled with nutritional goodness.  Girls especially will marvel at a meal decorated with brightly colored flowers they can eat.

You can purchase these flowers online, and sometimes at specialty supermarkets and health food stores.  You can even grow them at home.  Check out The Edible Flower Garden, by author Kathy Brown on how to do just that.

There's nothing wrong with offering incentives to your children in an effort to get them on the right food track.  Are their places you know your child loves to visit such as the park or the zoo?  How about a hobby they would like to take up?  Encourage them to do something nice for you in exchange, such as eating healthier foods.  If something they want costs money, help them understand that a wonderful way they can say thank you to you is by doing something that makes you happy (i.e. eating healthy foods).  Not only does it teach the value of thankfulness, but the great benefit is that even though it makes you happier, it also gives them the nutrition they need.  It's a double whammy-winner!