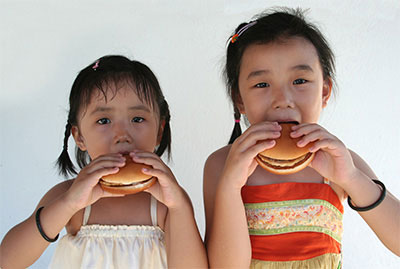 The health epidemic, largely as a result of the food industrialization in America, has directly affected the health and well-being of other nations worldwide.

People around the world are excited about American products and the American lifestyle, oblivious to the decline in the health and well-being of the American public.  Whether it is fast food, movies, or fashion, the influence of America on the world is undeniable.

American fast food companies are spending millions in developing countries to change the eating habits of the indigenous people, encouraging them to abandon the diets of their traditional culture in favor of becoming processed food and fast-food junkies.  As fast as highly chemicalized and processed foods spread around the world, so too does cancer, diabetes, heart disease, and autoimmune disorders.

Since it became a state, the number of native Hawaiians suffering diet-related medical conditions has risen dramatically.  Once they became more dependent on mainland food, losing access to their traditional foods because of hotels, spas, and golf courses, their health began to decline.  With approximately 80% of their diet imported from the mainland US, spam is now a top preferred food.

But it is not only our toxic food that is causing a global health epidemic.  Our environmentally irresponsible agricultural and fishing practices threaten the foods of indigenous cultures that rely heavily on oceanic foods for their survival.

The stark contrast in health is not more apparent than in Africa which, previously associated with hunger and food scarcity, has now seen a drastic rise in diabetes and obesity.  Today, over 1/3 of Africans considered overweight.

In Japan, a country previously synonymous with health and longevity due to a diet rich in organic whole grains, sea vegetables, fish, fermented soy (miso), and vegetables reflected in lovely, clear skin and slim bodies, their health issues now mirror those of the Americans.  Overweight/obese individuals include many Japanese youngsters.

On a recent trip to Male, Maldives, a local resident who showed us around the island educated us on the culture of his people.  He sadly recounted earlier days before "American foods" arrived at the islands, when chronic health issues such as cancer and heart disease simply did not exist, but now are a serious health problem.

Dr. T. Colin Campbell, author of The China Study (considered the most comprehensive study of health and nutrition ever conducted), noted correlations between the introduction of American fast food overtaking the eating habits of traditional cultures, and a rise in chronic health conditions.

Overweight people now outnumber undernourished people worldwide.  The current obesity rate is above 20% in every US state, at least 25% in 41 states, and over 30% in 13 states.  Let's take a look at some other sobering statistics:

The World Health Organization (WHO) reported:(2)

Poor health is expected to grow, and we are sending our chronic disease out globally.  It has now become a worldwide health problem.