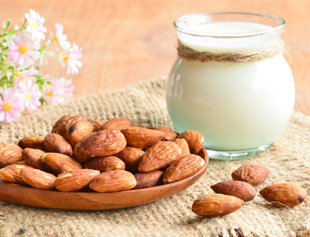 Almond milk is a delicious combination of almonds and water blended together and the pulp then strained out of the mixture.  To add some sweetness, dates, apricots, figs, or a dash of honey or maple syrup can be blended into the nut milk.

But what most people don't realize is that commercial almond milk barely contains any almonds.  Instead, it contains milk-like thickening agents and other additives such as carrageenan to imitate an almond-like taste.  The two biggest commercial nut milk sellers cleverly use deceptive marketing tactics on food labels to give their customers a very different idea of what kind of product they are really buying.

Over the past decade, millions of people have turned away from dairy milk in favor of non-dairy options which include almond milk, soy milk and coconut milk.  Almond milk tops the list as the fastest growing plant-based drink on the market, with an estimated $845 M in sales.

What is it about nut milks that has captured the attention of millions of consumers over dairy milk?  Let's take a look:

The downfall of dairy milks

A growing number of consumers are now wise to the fact that milk isn’t the nutritional touchstone it once was.  Today's commercial dairy milk is a very unhealthy product that falls far short of the claims that it provides important nourishment for the body.  It has been homogenized, pasteurized, comes from factory-farmed cows fed unnatural diets of GMOs, and if it's not organic, it typically contains antibiotic and pesticide residue.  Pasteurization is especially damaging as it destroys the enzymes that help the body digest the milk protein, it also denatures the calcium and other nutrients present in the milk.  This is a primary reason why many cannot properly digest dairy milk.

And the famous "vitamin D" in milk?  This vitamin D is NOT naturally occurring in milk.  Instead, a synthetic version is added that has been synthesized in a lab.  This synthetic vitamin has a very different biological effect on the human body as compared to the same nutrients that are naturally derived from fresh, whole foods.

Why you should avoid synthetic supplements...

If you have low thyroid function

Why Commercial Almond Milk is Not a Healthy Product

Almond milk is traditionally made from almonds and water.  But most store-bought forms of almond milk contain a substance called carrageenan. Carrageenan is extracted from red seaweed and added to almond milk as a milk-like thickening agent.  The resulting liquid may taste like almond milk, but it is far from the same healthy product.

In fact, most commercial almond milks contains only 2% almonds with carrageenan used instead.  They also contain more sweeteners than they do almonds.  A 1/2 gallon of Blue Diamond and Silk almond milks contain only 38 almonds, when there should be 144-192 to achieve the creamy taste.  This means that approximately 80% is made from thickening agents such as carrageenan and/or other additives.

Both Blue Diamond and WhiteWave (manufacturers of Silk and So Delicious) are being sued for improperly labeling their almond milk, with the demand that their packaging and websites clearly state their almond milk contains only 2% almonds and that all favorable health claims be removed.

Attorney J. C. Kelly who represents various clients in the lawsuit states “it’s being marketed as a healthy premium product because it is made from almonds, when it barely contains any almonds.  The product is really developed from thickening agents to create a milk-like substitute that tastes very much like milk.  The wrongdoing is really hitting home on a large scale.”

Why you should avoid carrageenan

Carrageenan is a thickening agent extracted from red seaweed.  It contains no nutrients and has been shown to cause numerous GI issues.  It is also an ingredient used as a laxative, in toothpaste, pesticides, cosmetics, and medications.  Research has shown that exposure to carrageenan could contribute to ulcers and the Food and Drug Administration (FDA) considered a restriction on dietary carrageenan, but no regulation was put into effect.

The great news is that recently, WhiteWave and Blue Diamond announced they would be removing carrageenan from their products.  But this does not address the complaint that their almond milks contain very few almonds.

How to Make Almond Milk

Making your own almond milk is very easy!  All you need is a few ingredients and a blender.  Let's take a look: 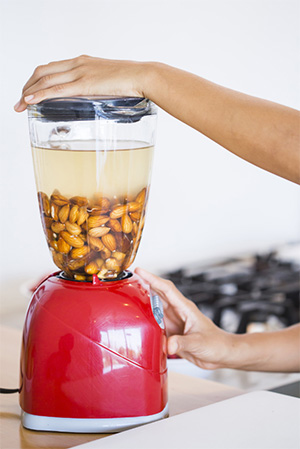 There are so many ways to enjoy fresh almond milk.  Experiment and have some fun!  Drink it straight; mix with dried or fresh fruit or cereal; add to hot drinks; use as a cooking ingredient, or mix with fresh fruit and freeze into fruit popsicles for a healthy and highly nutritious dessert.

Nut milks are not a substitute for breast milk

Almond milk (and other nut milks) may be highly nutritious, but they are not a substitute for breast milk.  During the first few days after birth, breast milk contains something very special called colostrum.  Also known as "liquid gold," colostrum is full of antibodies, immunoglobulins, and leukocytes (protective white cells that destroy dangerous bacteria and viruses).  It acts as a natural vaccine against bacteria, helping your baby's immune system to develop properly.  Newborn babies have not yet developed their own immune system, and this first milk is full of antibodies that help your baby develop a strong and healthy immune system.  These immunity factors are not present in almond milk.

Colostrum also contains lots of oligosaccharides and probiotics that are not found elsewhere (such as in formula milk).  In short, all newborns need colostrum.  Babies that do not receive colostrum are much more susceptible to digestive disorders and infections.

Check Out The Body Healer Protocol!

To learn more about healing your body with the power of food and healthy living, check out the Body Healer Protocol!  When it comes to restoring your mind and body to vibrant health, this powerful cutting-edge program is a no-nonsense approach that brings quick results and powerful change.