Let's explore the top 7 benefits of switching to organic foods:

If you are unaware of the serious health dangers of ingesting pesticide-ridden food, and using pesticides in your home and garden, it is important to educate yourself.  Common sense tells us that eating food covered with pesticides cannot be good for us - after all, pesticides by their very definition are killers.  But many people do not realize just how toxic they are.

Testing by organizations such as the Environmental Working Group has shown that foods grown and sprayed with toxic chemicals carry residue of these poisons into their entire physical composition.  The regular eating of foods containing these particles over time contributes to the damage of the cellular integrity of the body, increasing the likelihood of developing serious neurological conditions and chronic diseases such as cancer.

Because the damage to our bodies from ingesting pesticides is not immediately apparent and can take years to produce a cumulative effect in the body, it is easy to ignore the health concerns.  Organic food may be the more expensive choice, but when it comes to your health, the extra money you end up saving in healthcare can add up to thousands.  The additional stress caused by sickness is a price that cannot be quantified by any sum of money.

The reality is that if you care about your health, you cannot afford NOT to begin incorporating organic produce into your purchases.  The health benefits of a diet rich in organic fruits, vegetables, nuts, seeds, and legumes far outweighs eating a diet of processed and pesticide-laden food, and should be a critical choice when it comes to eating a healthy diet.

Both children and pets are especially at risk from pesticides, both in the environment and in their food.  Infants and children are growing at such a rapid rate, a time when their vital organs, bone structure, and muscles are developing, and they are highly susceptible to toxins in these foods.  Pound for pound, they drink 2.5 times more water and eat 3-4 times more food.

Pesticides can harm developing brain cells, even in small amounts.  Many health studies show they pose very serious health risks that have been linked to ADHD, autism spectrum disorders, developmental delays, fetal disorders, and cancer.   They have no place in our food chain, and should never, ever be fed to an infant during the first two years of their life.  Aim to provide only organic foods during this time.

Read about these health studies...

During pregnancy, the unborn fetus is also at risk.  Exposed to a dilute mixture of neurotoxins and endocrine disruptors in the womb, the risks of neuro-developmental disorders, especially autism, increases.

The good news is studies have shown that within days of switching school children's diets from conventional food to organic fruits and vegetables, many pesticide metabolites become undetectable in urine, and are cleared from children's bodies.  This is not only due to the absence of pesticides, but also because fruits and veggies are nutrient dense and help the body to quickly heal and purge these toxins.

#2  They Are More Nutrient Dense

Organic produce is grown in soils that are not depleted from the continual use of damaging chemicals.  Studies have shown that organically grown foods contain more vitamins, minerals, enzymes, and other micronutrients than those harvested from large-scale non-organic farms using chemical treatments.  One of the most powerful ways to experience the vital goodness and energetic nature of natural foods is to eat it in its whole, organic form.

Learn about the many antioxidants in natural foods:
The Body Healer Protocol...

#3  Organic Farming Works With the land, Rather Than Destroying It 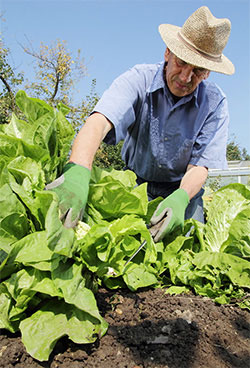 Organic crops are rotated from year to year to allow the soil to retain its nutrients between growing cycles.  Animal grazing is also rotated to allow grasses to recover and replenish with the seasons.  The soils are composted with broken down plant matter, and some farmers, similar to when wine growers harvest grapes, plant seeds according to biodynamic farming practices (e.g. during specific moon phases).  In short, organic farmers work to co-create with nature, respecting the natural cycles of the environment.

In contrast, large-scale farming methods rely on chemicals to produce food, chemicals that destroy healthy soil bacteria and ecosystems, and deplete the soil of essential minerals and nutrients necessary for the healthy growth of produce.

Farming methods in existence for over 5,000 years use time-tested principles that govern the sustainability of their system, yet biotech companies (pesticide manufacturers and producers of GMOs) looks at these systems as primitive and peasant-like.

Organic farming cuts out the use of pesticides and herbicides, protects our health, protects our groundwater and our wildlife, and promotes soil fertility.  Even though crop yields tend to be lower on organic farms, they also tend to be the same as or more financially successful than conventional farms because their overhead is lower (no need to purchase synthetic pesticides and fertilizers, pay royalties for GMOs, or purchase expensive farming equipment for pesticide spraying).

The Worms Have It

Microorganisms in the soil are critical to the growth of plants.  The biological activity of earthworms plays an important part in enriching the soil.  When eating the soil, these worms produce enzymes and also help to loosen the soil, allowing water and air fuller access.  Soil rich in worm casts and enzyme-rich manure is highly favored for growing plants.  The reason manure is a fantastic fertilizer is because it contains urine, feces, and straw, which are naturally powerful fertilizers.

In comparison, synthetic fertilizers and poisonous pesticides lower the vitality of growing plants and destroy this natural ecosystem.  They kill the microscopic creatures that are so important to the life-cycle of healthy, enzyme-filled nutrients.  Plants grown in depleted, unhealthy soils result in unhealthy plants that are not only lower in nutritional quality, but the unhealthy soil also attracts far more pests.

In the US, over 99% of the meat sold in stores and served at restaurants is called "factory-farmed" meat.  This refers to meat raised on commercial feed lots.  Not only is eating factory-farmed meat detrimental to your health due to medicated additives (80% of the US supply of antibiotics is used in agriculture), but the treatment of animals on factory farms in the US is considered so inhumane and cruel that it is banned in countries such as Europe, Australia, New Zealand, and Canada.

Are We Really This Uncivilized?

Far from the pretty pictures on labels of happy cows grazing in the pastures, factory-farmed cows are cramped into tiny spaces and physically and sexually abused, with confined dairy cows viewed as "milking machines."  Chickens are kept in cages and areas so small their wings snap.  Many animals are beated, abused, left to die, and piled up to decompose.  Whistle-blowers have risked their lives to film animals kicked, stabbed, and beaten to death in these huge facilities on a routine basis.

These whistle-blowers are heavily penalized and threatened for exposing such acts, and in some states whistle-blowing is illegal due to the Ag-Gag Bill.  In these states, workers are not allowed to discuss the cruelty they witness at factory farms.  The shameful Ag-Gag bill protects the milk and meat industry by preventing the reporting of illegal treatment of animals.

The average conventionally grown apple has 20-30 artificial chemicals on its skin, even after it has been washed.  A 2006 USDA test found 81% of potatoes tested still contained pesticides, even after being both washed AND peeled.  According to the Environmental Working Group, the potato has one of the highest pesticide content of 43 different fruits and vegetables tested.

Today's pesticides and herbicides are built to withstand farming irrigation so that the pesticides do not wash away when the farmers water the plants.  Rinsing and scrubbing produce in your sink does not remove this residue.  This is because the toxins in the pesticides are systemic (they are taken in by the root system of the plant and distributed throughout the entire organism), so no amount of washing will remove them.  Imidacloprid is an example of a systemic pesticide that has been on the rise for the last 15 years, and now represents a new, unstudied, and unregulated risk.

Some GMOs (e.g. BT corn) are engineered to produce their own internal insecticide.  The EPA officially labels GMO corn as a pesticide for this reason.  The average ear of corn grown in the US has 3 different systemic insecticides within it and is the backbone of the new "chemicalized" US food system, used in farm animal feed, high-fructose corn syrup, and in thousands of processed human and pet food products.

How can you avoid pesticidal residue on your produce?  Buy organic.  If you buy conventional produce, keep a spray bottle of vinegar next to your sink to spray on produce to neutralize pesticides.  This may not remove pesticidal residue within the food, but it will help remove them from the surface.  Also, avoid non-organic crops that contain the highest amounts of pesticides (see below).

#6  They Are More Flavorful

Organic foods are often much more flavorful than their non-organic counterparts, in part because their size is not artificially and unnaturally increased.  This is easily apparent when trying a simple experiment of growing your own strawberries (or other fruit) and comparing their taste with its conventional counterpart from the supermarket.  They will be so much sweeter!

#7  They Are Devitalized & Emit A Lower Energy Frequency

When tested using sophisticated frequency measuring devices, fresh, ripe, organic produce resonates at a very high frequency (over 80 MHz).  When the same fruit has been sprayed with pesticides, this frequency plummets.  A healthy body naturally emits a high energy frequency, but the more we eat lower vibrational foods, the more we lower the frequency of our body.  As diseases resonate at low frequencies, we automatically become a breeding ground for them to develop.

Learn more about the energetics of food & disease:
The Body Healer Protocol...