Genetically modified foods are a highly controversial topic with both aggressive opponents and proponents.  Millions of dollars are being spent to sway the public this way and that, with myths and facts contradicted on both sides.  It is no wonder the public is completely confused on the issue.  Some a very concerned about the health impact, and others feel that it is "no big deal" and  "everyone is overreacting."

In reality, the facts are not what are confusing.  It is the availability of the facts and the misinformation that causes confusion.  Let's take a minute (well, several minutes) and educate ourselves on what GMOs are, whether they hold up to the promises made by their creators, and whether they pose risks to our health and/or the environment.

How Food Is Genetically Engineered

There are 6 major biotech companies that genetically engineer our food:

But just how do GM crops become resistant to weeds and pests?  By genetically engineering the herbicides and pesticides into these crops, they are built to become resistant to both weeds and insects.  Some of these crops are deliberately created to withstand increasing pesticide doses.  Some are also engineered to produce their own insecticidal toxins internally.  The Environmental Protection Agency (EPA) labels GMO corn as a pesticide because it can produce its own internal pesticide.

How GMOs Are Created 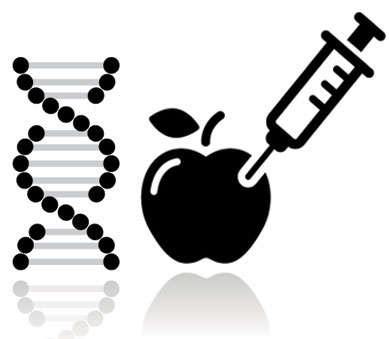 Let's take a look at how genetically modified organisms are created:

When a gene is transferred, proteins become mutated and malformed.  Studies are showing that not only are these proteins often dramatically smaller than they should be, but they can also have a potential toxicity.  The activity of the transferred protein can be different from the original protein and it may not be able to function as originally intended.  There are many experiments where mice and rats suffered organ damage and other health problems as a result of the malformed proteins in genetically modified foods.  These malformed proteins may also produce reactions that are toxic.  The process of genetic engineering can produce a new toxin that has not been evaluated because it is an unrealized side-effect of the technology.

When genetic engineering first began, a very important assumption was made.  Scientists originally thought that each gene was responsible for creating one protein.  The public was told that this science was based on precise engineering, and that specific traits can be inserted with predictable effects.  Scientific experts also assumed that the genetic engineering of food was just an extension of natural breeding, and posed no risks because of its predictability.

Unpredictable Results
We have since discovered the opposite to be the case, and that genetic engineering is far more complex and much less understood than genetic scientists originally assumed.  Genes function as part of a highly sensitive ecosystem that we still know very little about.  But what we do now understand is that when we insert a gene, we cannot expect one protein.  Many proteins are inserted as part of the gene, and when you inject multiple proteins, you can expect disturbances.

Looking back, it was very short-sighted on the part of genetic scientists to assume that a gene contains a single protein that can be controlled, and that it can be extracted and expected to function as it did originally when inserted elsewhere.  Life is an extremely complex process that exists in a symbiosis, an orchestrated symphony where all the parts function as a whole.  When we extract genes here, and insert them there, we introduce chaos into this delicately balanced symphony.

This assumption also reflects a poor understanding of genomes.  It is based on an assumption that genes alone are responsible for traits and characteristics.  What creates traits is not simple DNA, but rather thousands of elements synergistically interacting with one another.  This is why biotech companies have achieved very limited success with very few food items.  Genes do not act as isolated units.

It is simply impossible to understand, measure, or predict the activity of a genetically modified organism that has been altered in such a manner, nor can we predict how it reacts and responds to its environment.  Our understanding of genetic engineering is in its infancy.

When it comes to GMOs, there are 8 big myths that are currently circulating.  Over $250 million dollars is spent each year on advertising the benefits of GM crops to the general public which, when looked at closely, is not only very misleading when it comes to hard facts, but the widespread use of GM crops has resulted in some unintended and hazardous consequences that not even the biotech companies who create them can control.

Let's take a look at each of these myths to determine what benefits, if any, actually do exist.

The 8 myths of GMOs

What Is "The Monsanto Protection Act"?

Nicknamed the “Monsanto Protection Act," this act was a budget provision created to protect biotech companies from litigation due to adverse health reactions that can arise from the public's use of their GMOs.  In other words, it would shield biotech companies from being threatened by lawsuits and would prevent courts from interfering with and forcing an end to a genetically modified crop, even if these crops are shown to produce damaging health effects.

The general public were largely unaware that companies could be protected at the direct expense of their health and well-being.  When social groups and activists discovered this new budget provision, they worked very hard to inform consumers, and the widespread knowledge resulted in a public outrage.  The Monsanto Protection Act was considered a direct attack on the rights of consumers.  Companies such as the Center For Food Safety, Food Revolution Network, and countless others worked tirelessly to rally support from the public to prevent this damaging act from being passed.  The rapid growth of the food movement proved itself formidable enough and the act was finally killed.  But the fact that it even reached as far as it did is very disturbing.

Where Does That Leave Us - The Choice We Must Make

After reading the 8 Myths of GMOs, it is very clear that we are just beginning to uncover and understand the failure of GE crops:

Nobody rushes out in excitement to buy a genetically modified food.  If two foods were available at the same price, one a GM version and one a non-GM version, knowing that there are no benefits and that many studies emerging point to a possible and significant health risk, why would we choose the GM version?

The only benefit of GM products is the high profit margin gained by the biotech companies.  Unless you are a biotech employee and engage in profit sharing, this does not really qualify as a benefit to you.

Trying to control and patent life forms is not a healthy approach to life.  We need to work with nature, not manipulate it and work against it.  We are just beginning to understand the capacity of the soil and biodiverse systems to maintain a natural balance between pests and predators, to control pests without pesticides, and to manage weeds without herbicides.  GMOs take us in the opposite direction.

Each and every one of us makes decisions every day on the type of food we buy, and where we buy it from.  The natural food movement is growing rapidly, and we have a decision to make.  We can join it, or we can stand against it.

Countries such as Bolivia and Brazil now have national laws for responsible farming practices due to the pressure of social groups, farmers, and the people to implement laws that allow for a healthier approach to growing crops.  Countries such as Ecuador have chosen to be free of GMO crops and seeds.

How to choose non-GMOs at the market...