Microwaves - Why You Should Ditch Them 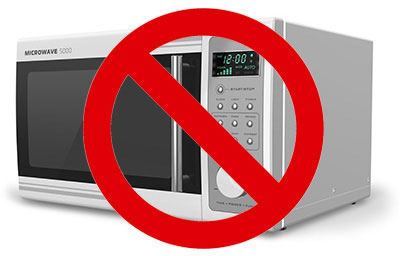 It's interesting that humans go out of their way to destroy the nutritional value of their food before it gets anywhere near their mouths.  With the advent of the processed food industry, our food is not only processed beyond recognition, filled with synthetic chemicals (some of which are shown to be carcinogenic, and are banned in other countries), and covered with pesticides (which studies have conclusively linked to serious health conditions), but the microwaving processes helps destroy any remaining nutritional value.

The more you use the microwave, the worse your nutritional state will become.  As a microwaves heats food, it causes internal damage to the delicate molecular structures of the vitamins and other nutrients.  More seriously, eating microwaved foods directly affects the quality of our blood.

Microwaves are a form of short-wave electromagnetic energy (like a light wave or radio wave) occupying a part of the electromagnetic spectrum of energy.  They are not only used in the kitchen microwave oven, but are also used to relay long distance signals and information across the earth or to a satellite.

A microwave oven contains a magnetron (a tube where electrons are affected by magnetic and electrical fields) that produces microwave length radiation.  It is this radiation that interacts with the food molecules heated in a microwave.

How Microwaving Affects Food & Our Body

Both long and short term published studies show that microwaved food has a significant and detrimental impact on both our blood, and on the various systems throughout the body when used as part of our daily diet.  Not only that, but many key nutrients are also destroyed during the microwaving process, with the availability of other nutrients reduced.  Microwaves have more than earned a place in the Dirty Dozen.

Let's take a detailed look at these long-term studies, and look at the Top 10 reasons you should ditch your microwave!

Food scientist Dr. Hans Hertel was the first scientist to carry out a clinical study on the effects of microwaved nutrients on the blood and physiology of the human body.  His controlled study was conducted with Dr. Bernard H. Blanc of the Swiss Federal Institute of Technology and the University Institute for Biochemistry.   The study revealed significant and disturbing changes in the blood of people who consumed microwaved milk and vegetables.

The overall experiment was very similar to the Pottenger cat study of raw vs. pasteurized milk, except that the test subjects were humans, and the time-frame was shorter.

8 volunteers participating in the study received one of the following food types on an empty stomach.  Blood samples were taken from every volunteer immediately before and after eating:

All foods that were heated by microwave ovens caused changes in the blood of the volunteers.  The scientific conclusion showed that microwave cooking changed the nutrients in the food, and that the subsequent changes in the participants' blood could cause deterioration in the human system (which was conclusively proven in a later study conducted by both the Germans and Russians - see below).

The significant changes discovered in the blood samples from those eating foods cooked in the microwave oven included:

"There is extensive scientific literature concerning the hazardous effects of direct microwave radiation on living systems," Hertel stated.  "It is astonishing, therefore, to realize how little effort has been made to replace this detrimental technique of microwaves with technology more in accordance with nature."  Hertel went on to explain that technically produced microwaves are not the same microwaves produced by the sun, which have a very different effect on living organisms.

"Leukocytosis (an increase in leukocytes), which cannot be accounted for by normal daily deviations, is taken very seriously by hematologists.  Leukocytes are often a sign of pathogenic effects on the living system, such as poisoning and cellular damage."  This is an important point, as leukocytes increased in volunteers consuming microwaved food.

In March 1993, Dr. Hertel was convicted for "interfering with commerce" in Switzerland and prohibited from continuing to publish the results of his study.  Dr. Hertel fought the ruling, which was later overturned by the courts.

A Russian study was published by the Atlantis Rising Educational Center in Portland, Oregon showing that carcinogens were formed in virtually all foods tested in microwave ovens.  No test food was subjected to more microwaving than necessary to accomplish cooking, thawing, or heating to ensure sanitary ingestion.

Summary of the study results include:

Antioxidants such as antocyanins and flavonoids, and other nutritional components are easily damaged or become less bioavailable by microwaving.  Microwaving has been shown to cause a 97% decrease in antioxidant value (of vitamin C) in broccoli compared to other cooking methods.(1)  A Japanese study also revealed that 30-40% of vitamin B12 was destroyed in foods cooked by a microwave.

Why many people are B12 deficient...

The most significant research was produced by German and Russian research facilities concerning the biological effects of microwaves.   In most cases, the foods used for research analysis were exposed to microwaves at an energy potential of 100 kilowatts/cm3/second, the point considered acceptable for sanitary, normal ingestion.  The research was conducted by:

The effects of microwaving on foods noted by both German and Russian researchers was categorized as follows:

Microwave exposure caused a significant decrease in the nutrient value of all foods researched.  The following are the most important findings:

Exposure to microwave emissions also had an unpredictably negative effect upon the general biological health of humans.  This was not discovered until the Russians experimented with highly sophisticated equipment and discovered that a human did not even need to eat the microwaved food substances to experience the negative effects of the technology.

The following effects were noted:

Based on the results, the use of microwave apparatus is definitely not advisable.  Due to the problem of random magnetic residue and binding within the biological systems of the body (Category III, #8), which can ultimately effect the neurological systems (primarily the brain and nerve centers), long-term depolarization of tissue neuroelectric circuits can result.  Because these effects can cause virtually irreversible damage to the neuroelectrical integrity of parts of the nervous system, eating microwaved foods is clearly not advised in all respects (I. R. Luria, Novosibirsk 1975a).

Studies show that microwaving human milk, even at a low setting, can destroy some of its important disease-fighting capabilities.  Milk heated between 72°C and 98°C loses 96% of its immunoglobulin-A antibodies (the antibodies that fend off invading microbes).

Top 10 Reasons to Ditch Your Microwave!

Based on not only the Swiss, Russian, and German studies (see above), but various other studies emerging, here are 10 great reasons to ditch your microwave.

The German/Russian study revealed that humans did not even need to eat the microwaved food to experience a negative biological impact.  Simple exposure to the microwaves themselves was sufficient to cause an adverse reaction.

Ditching the microwave is a great reason to incorporate more healthful and nutritious foods that do not require cooking, such as fresh fruits, salad vegetables, and pseudo-grains such as quinoa.  When you need to cook, consider using a toaster oven as a replacement.  They are inexpensive, and depending on the brand, can work wonderfully as a mini-oven too.  Most packaged foods give instructions for both microwave and oven preparation.  Cooking your food may take a little longer, but it is more than worth the wait for a much healthier alternative.  Our family was completely addicted to using the microwave.  But 4 years ago, we walked away from it, and never looked back - and today, we don't miss it at all!!