The average American drinks 300 bottles of soda per year, each of which contains between 7-14 teaspoons of sugar.  Most sodas contain no nutritional value - they simply contain empty calories.

Sodas and energy drinks that are low or zero-calorie are not much better, and typically contain artificial sweeteners that add to their health depleting effects.

Energy drinks also contain the addition of chemicals and stimulants to artificially stimulate the central nervous system.  Most of the vitamins and minerals that have been added are synthetic. 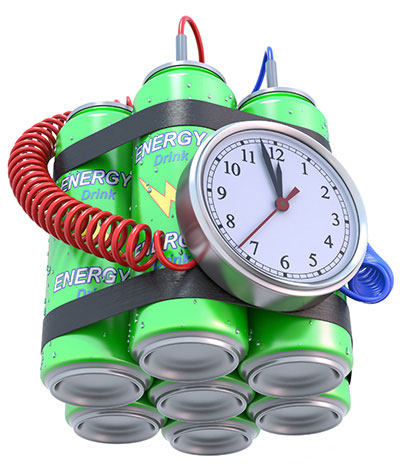 Many of us have done it...  We have a long drive through the night ahead of us and need to stay awake, or we have a test we need to study for.  We guzzle a few energy drinks, and voila!  We made it!  The odd energy drink is not the problem (even though a good quality strong coffee is a much better alternative), but for many people, energy drinks play a much greater role when drank on a daily basis.

The average 16 oz. can of energy drink can contain 13 teaspoons of sugar and the caffeine equivalent of 4 or more colas.  Despite what flashy energy drink labels say, there is very little difference between a soda and an energy drink.  Most of them are glorified sodas containing a different array of chemicals.  The main difference is the use of a stimulant such as caffeine.  If an energy drink advertises "no caffeine" it is because other stimulants are used instead such as taurine, guarana, ephedra, or similar substances.  The end result is artificial stimulation of the body, regardless of which stimulant is used.  Energy drinks can often contain multiple stimulants to increase their effects.

Needing an artificial energy boost on a regular basis from energy drinks is a warning sign.  Take a look at the millions of workers in corporate America who simply cannot function without a cup of coffee in the morning.  It is an addiction that can and will take its toll on the body.  The chronic artificial stimulation caused by caffeine and energy drinks on the body, especially the adrenals, contributes to a general weakening of the system, thyroid imbalances, and the onset of adrenal and chronic fatigue.

Stimulant drinks are not healthy or natural, and they do not offer us any health benefits.  Quit the chemicalized energy drinks, and get high on life, not chemicals!

The false advertising of energy drink manufacturers lull many people into believing their drinks are healthy, but especially target the health and fitness, and weight loss industry.  Energy drink manufacturer's blaze all sorts of misleading words on their labels to give the illusion their products are healthy.  Ingredients are made to sound high-tech that are actually a concoction of artificially made chemicals that are foreign to the body.  The FDA does not define the term "energy drink" and manufacturers are left to their own devices to determine what that means and what ingredients they can use.  False claims such as "natural" and "lose weight" and "energize" and "improved performance and concentration" along with other catch-phrases shamelessly draw the public to their products.

When taken before and during workouts, energy drinks can overstimulate the entire system causing internal stress.   A fit, healthy, vibrant body never need any artificial jolt to exercise or get through the day.

How exactly do sodas and energy drinks affect our health?  Let's take a look at some studies: 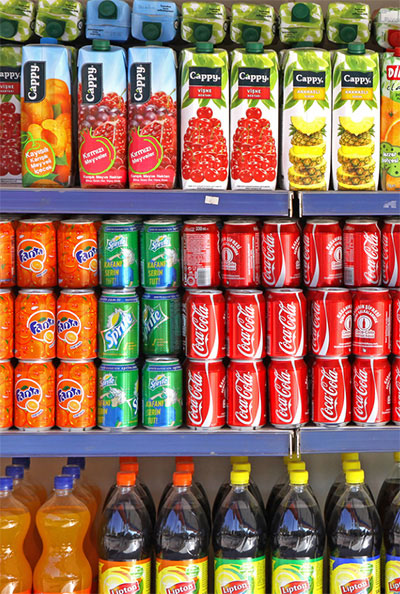 Most soft drinks contain ingredients associated with an increased risk of metabolic syndrome, a name given to a collection of different risk factors for both diabetes and heart disease.  Those who drink soda have a 20% increased risk of developing type 2 diabetes.  Studies also show an association between drinking both regular and diet soda, and larger waistlines.  The relationship between soft drink consumption and body weight is so strong, researchers calculate that for each additional soda consumed, the risk of obesity increases 1.6 times.
Osteoporosis...

Soft drinks contain a flavoring agent called phosphoric acid, and a high phosphate diet has been associated with bone breakdown and an increased risk of osteoporosis.  This is because phosphoric acid is, well, extremely acidic.  The body recognizes that the blood is now more acidic and immediately tries to restore balance by neutralizing this acid.  To do this, it leaches calcium (an alkaline mineral) from our bones and our teeth, contributing to osteoporosis.

The acid/alkaline balance & your health...

Colas contain high levels of phosphoric acid, which has been linked to kidney stones and other renal problems.  Evidence suggests that consuming too much phosphorus may strain the kidneys.  Japanese researchers have gone as far as to recommend that even healthy people avoid colas.  Those who already have kidney failure have long been warned to avoid high-phosphorus foods such as colas.
Cancer...

The artificial caramel coloring used to make Coke, Pepsi, and other colas brown contains 2 contaminants in the coloring, 2-methylimidazole and 4-methylimidazole.  Both contaminants have been found to cause cancer in animals.  To add insult to injury, the coloring is purely cosmetic and is only used to make the soda "look good!"  According to California's Proposition 65 list of chemicals known to cause cancer, just 16 mcg per person per day of 4-methylimidazole is enough to pose a cancer threat, and most popular brown colas (both diet and regular) contain 200 mcg per 20 oz. bottle.

The Center for Science in the Public Interest has petitioned the FDA to ban both of these substances, and soft drink manufacturers have committed to removing these chemicals from their sodas.  But why the FDA allows such chemicals to exist in our food chain to begin with, knowing the health dangers, is just as concerning.

Soda are highly acidic and easily dissolve the enamel from our teeth, laying the foundation for tooth decay and abscesses if left untreated.  Dentists have coined the term "Mountain Dew Mouth" for kids that come in for a check-up with a mouth full of cavities caused by the high amount of sugar in sodas.

Learn about how diet plays an important role in jaw structure and teeth health, both during pregnancy, and in the diets of infants and children.

Nearly all soda cans are coated with an epoxy resin called bisphenol-A (BPA).  BPA is used to prevent the acids in the soda from reacting with the metal in the can.  BPA is also found in plastic bottles, water bottles, plastic food containers, plastic cooking utensils, and many other plastic items.  Over 90% of plastic bottles contain BPA

BPA is a dangerous chemical that has been linked to many health issues ranging from hormone disruption to infertility, reproductive cancers, and neurobehavioral effects such as autism and ADHD.   The CDC has stated that soda cans, along with restaurant, school, and fast-food meals, are a major source of exposure to the chemical.  Both Pepsi and Coke may be looking to develop a 100% BPA-free plastic bottle, but neither is focused on using BPA-free aluminum cans.

For younger women, soda may be linked to a reduction in fertility, which could be the result of BPA contamination.

The majority of corn grown within the US is genetically modified to resist toxic pesticides, with some strains of corn built to produce their own internal pesticide.  Due to the lax FDA safety regulations, there are no long-term safety studies that exist to prove these crops are safe.  On the contrary, independent studies conducted outside of the US have found that animals fed genetically modified crops exhibited digestive tract damage, organ damage, accelerated aging, infertility, and reduced life span.  French scientists have found that rats fed a GMO corn diet over their entire 2-year lifespan developed mammary tumors and died earlier than rats that ate non-GMO corn for the same time frame.

Head on over to the GMO section to learn more about what GMOs are.  Read about the 8 big GMO myths, including the various studies conducted outside of the US showing the risk of serious health consequences linked to eating GMO food, and how the biotech companies work tirelessly and spend millions to smother and discredit these reports.

Soft drinks can significantly increase the risk of developing gout in both men and women: