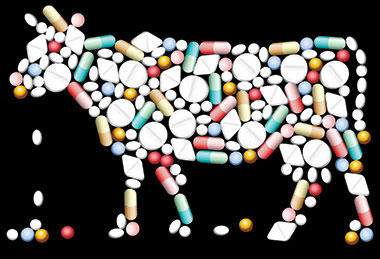 When we eat this meat, we are eating degraded meat as traces of these chemicals pass into our system.  Experts are also citing antibiotic usage in factory farming as a contributing factor to the steadily rising rates of antibiotic resistance in the US.

These contaminants pass directly from the meat
into your body when you consume it.

When we eat factory-farmed meat (or feed it to our pets), here is the chemical concoction that often comes with it:

It is a big business.  So big it is estimated that 80% of the antibiotics in the US are used in agriculture.(1)  In American factory farming facilities, animals are routinely fed antibiotics to prevent infections from both the unsanitary conditions in which they are raised, and the ill health they suffer as a result of how inhumanely they are treated.

13% of antibiotics given to animals are simply to make them grow faster.  The overmedication of animals has resulted in antibiotic-resistant strains of malaria, tuberculosis, and staph.

Almost all beef cattle entering feedlots in the US are given:(2)
-  Hormone implants to promote faster growth.
-  6 anabolic steroids, used in various combinations.

Measurable levels of both the above growth-promoting hormones are found at slaughter in the muscle, fat, liver, kidneys, and other organ meats.  The fat levels of commercially raised chickens are more than 3 times the level of free-range chickens because of the artificially induced bulk created by growth hormones.

"These findings suggest that maternal beef consumption is associated with lower sperm concentration and possible sub-fertility, associations that may be related to the presence of anabolic steroids and other xenobiotics in beef."(3)

The livestock industry is becoming increasingly reliant on pharmaceutical companies to help them engineer the "perfect meat."  Medicines, feed additives, vaccines, and parasiticides for pets and livestock are a $22 billion global market.  These chemicals include dangerous meat additive such as ractopamine, used by pig farmers in pig feed to unnaturally accelerate weight gain, and a chemical banned in 160 countries.

Elanco Animal Health, a division of the pharmaceutical company Eli Lilly and Co., is a leading producer of medicated feed additives for the agricultural industry.  Merck & Co and Sanofi focus on the production of vaccines and parasiticides.

Medicated additives systematically added to farmed animal food add to their chronic disease, just as they do in humans.

37% of pesticides produced are used in agriculture, and are added to the corn and soy and other animal feed products provided to factory-farmed animals, as well as sprayed on the pastures they graze on.  A single bushel of corn eaten by cattle has been treated with over 1 gallon of oil-based fertilizers.

Pesticides are as toxic to the farm animal food chain as are they are to both the human and pet food chains.

Pesticides in our food:  The health hazards... 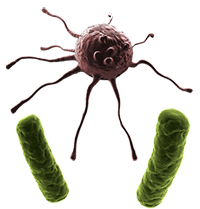 Malignant tumors are routinely found in animals that are sent for slaughter.  As a very small percentage of animals that pass through the slaughterhouse are inspected, many diseased animals undoubtedly make it to the kitchen table.

Over their lifetime, an animal collects and holds in their tissues an array of poisons from pesticides, to herbicides, and artificial fertilizers.

Farmed fish are often cramped together in a disease-ridden environment that affects both the health of the seafood and our health when we eat it.

Heavy metal pollution is now a serious concern as mercury and other contaminants are being found at alarming levels in fish such as tuna, swordfish, and other species.  Check out the Eco Friendly/Earth Friendly Seafood Guide to make both safe and ecologically responsible seafood choices.

Pastured grass is the natural and biologically appropriate diet for farm animals.  But these animals are fed ingredients far from their natural diet, including genetically modified corn and soy feed, and animal by-products. Factory-farmed animals also have chemicals administered to their food.  Just as with humans, this contributes to accumulated toxins and chronic disease in the animal.

Lack of appropriate nutrition directly correlates to a reduction in the health of the animal, and meat that is far less nutritious.

Our Pet's Food At Risk

The public trusts that the government will do all it can to protect their pets from dangerous pet foods on the shelf.  This is far from the case.  Although largely unknown to the general public, not only has the FDA done little to address the long-standing issue of contaminated jerky products from China which have caused thousands of pets to become sick, but they also allow the following items to be legally used in pet foods:

Here are their policies:

Finally... No More Arsenic in Poultry

When it comes to chicken feed, arsenic is a common occurrence.  Chicken feed contains roxarsone, which is an arsenic-based food additive.  When chickens eat this feed, they pass the toxin on to their eggs.  Roxarsone was approved by the FDA in 1944 as a way of preventing chickens from becoming ill.  Some of the chicken waste is also used as fertilizer, and is not properly disposed of, leading to arsenic in soil, water, and crops.

Feeding arsenic, which is an extremely toxic poison, to a popular food item such as chicken is dangerous.  Arsenic exposure is linked to serious health conditions including cancer (skin, bladder, kidney, liver, and lungs), as well as endocrine and neurological disorders.

Arsenic poses a threat to public health and pollutes our environment.  Although many public figures stand for banning arsenic in the poultry industry, disturbingly, Republican Sen. E. J. Pipkin called the ban attempt an "assault" on the profitable poultry industry.  He stated that industry-funded studies support the FDA's contention that the feed additive is safe and claims that voicing concerns of arsenic in poultry sends an "anti-farming" message to the state's poultry industry.

In what has become a typical response from the FDA on dangerous chemicals in our foods, until recently it had chosen not to ban arsenic as a food additive.  Finally, after food-safety groups threatened to sue, (and almost 4 years after the agency was presented with a petition asking that arsenic-based drugs be withdrawn), the FDA decided to act on the issue.  The nation's first statewide ban on the use of additives in chicken feed containing the toxic additive was among a dozen new state laws that took effect Jan. 1, 2013 (in part due to arsenic also being found in rice).  The FDA announced it will remove three arsenic-containing drug types used to treat livestock, most notably chickens.  This latest move on arsenic in the food supply will result in what we hope to be an almost total elimination of arsenic from animal feed.